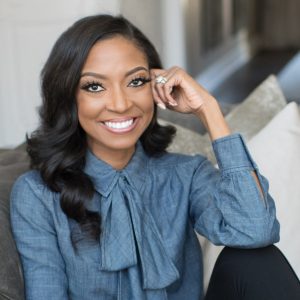 A master in teaching the art of manifestation, this former Sports Attorney and Miss America Finalist left her full-time job as a stuffy big-firm lawyer and turned her passion for people into a multi-million dollar enterprise just a few years ago. She helps emerging & established women influencers of faith to Believe Bigger, Live Bigger and Profit Bigger so that they can ultimately Give Bigger.

As the Chairwoman of the Godfidence Institute & Business School, her firm’s courses, events, and results-based coaching programs equip influencers and entrepreneurs to monetize and market their message to the massess.Her signature programs include the Speak for Pay® Bootcamp, Brand Class, Attract Sponsors, Find Your Purpose, and The Godfidence Women’s Summit.

Named Woman Entrepreneur of the Year by the Atlanta Business League, she is a graduate of Georgetown University Law Center, a member of the State Bar of Georgia, and is admitted to practice before the Supreme Court of the United States.

Marshawn released her best-selling book, SKIRTS in the Boardroom, published by Wiley, the largest business book publisher in the world. It was the first time that Wiley published a business book with an African-American female under the age of thirty!

Marshawn’s philosophy is – “If you are not living on the edge, you are taking up too much space.”