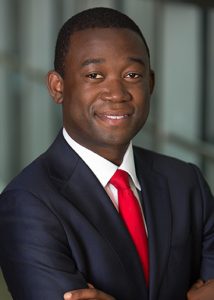 Adewale “Wally” Adeyemo currently serves as the president of the Obama Foundation.

His time prior to government service was spent as an editor at the Hamilton Project at the Brookings Institution, a program which focused on crafting policy proposals for long-term and inclusive economic growth.

He now joins the Obama Foundation as it continues to build the Obama Presidential Center in Chicago while drastically increasing its leadership development and civic engagement initiatives, including the Community Leadership Corps, My Brother’s Keeper Alliance and the Girls Opportunity Alliance.

Adeyemo is a prominent member of the Aspen Strategy Group, which seeks to promote sustainable economic opportunity across the nation. Additionally, he serves on the board of social, political and economic equity-focused think tank, Demos.
With a nearly unmatched expertise in national and global economic policy, Adeyemo will be instrumental in ensuring the effectiveness of the foundation’s global civic engagement initiative expansion due to take place throughout the rest of 2019 and into 2020.

“Wally is the ideal person to help lead the Foundation team as we continue to grow the impact of our global civic engagement programs and advance the Obama Presidential Center,” said Board Chairman Martin Nesbitt in a press release. “Given his executive experience in both the public and private sectors and previous service with President Obama, Wally is well positioned to help us continue to translate our sky-high ambitions into operational reality through daily leadership of our talented staff.”

Adeyemo is the son of Nigerian immigrants who came to the U.S. seeking to give him and his siblings a chance at a better life. He would attend the University of California at Berkeley, obtaining a bachelor of arts degree before being accepted to Yale Law School where he would earn his Juris Doctor. This education and his instilled work ethic would lead him to his impressive career culminating in his service in multiple powerful positions directly under the president of the United States.

In his new position as president of the Obama Foundation, Adewale Adeyemo will continue working to ensure a more just and equitable economy by focusing on initiatives bringing a new generation of leaders to the forefront of the world’s political and socioeconomic landscape.